yakarov79 uploaded a file to Meteor 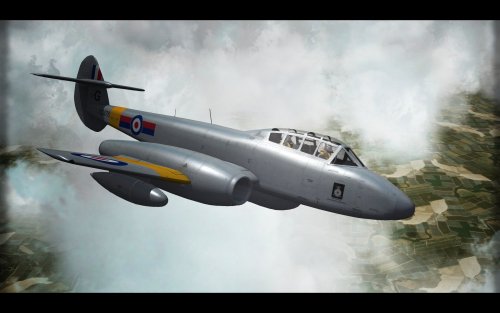 Gloster Meteor T.7 second improved version for SF2. Basic modding skills are required to run this mod.  (copy/paste, mod folder structure etc.)  Install:
If you are here which means that you like old jets, and for sure you downloaded the previous pack already.
You should have proper squadronlist.ini from the previous pack by paulopanz. Fuel tanks- not to be afraid. Overwrite or just leave it. 100 gal tank is original TW tank. You can overwrite or just simply do not copy.
175 gal tank also.
Tanks are just ini files. Mod uses tanks that are part of aircraft lod. This is highly modified Veltro2k model uploaded on CA somewhere in 2016 by paulopanz. Some time ago few guys decided (because they have a chance to do so) to rework this pretty aircraft. So, first of all, thank you Veltro2k. Although. There is just very few original parts of an old model. Most of it was remodeled. Added bits here and there.
We changed mapping and we made new skins...and a lot of new stuff. You will see. Of course, you could expect more skins. And if you are expecting more skins -  you will have to do it on your own. But templates are available.  All skins are in 4096x4096 format. You can easily resize to needed resolution.  better to downsize than rescale to higher res. For sure Israeli Meteor will be uploaded someday soon. WIP. Credits.
Veltro2k  - original model
Me -  model rework and some other mambo jumbo, hangars.
76.IAP-Blackbird - also model re-working.
Soulfreak  - skins.
bobrock  Weathering
Decals - soulfreak and some are borrowed from paulopanz pack.
Charles - original FM from original T.7 upload.  Pilots - I have no idea / don't remember who did it. All credit to him/her.  - one of my favorites figures in a game - I've added this to correspond with the data file.   And yes the pack is huge - but we put a huge amount of work also. Have fun
Report bugs. Expect the unexpected Jarek Hereda THIS MODEL IS ONLY TO BE DISTRIBUTED AS FREEWARE AND IN NO OTHER CIRCUMSTANCE SHALL IT BE USED, EVEN IN PART OF ANYTHING THAT IS PAYWARE. IN ACCORDANCE WITH THE COMBAT ACE MODDERS AGREEMENT