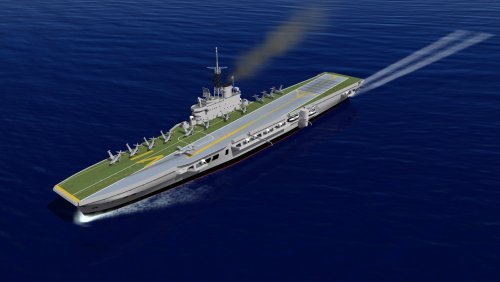 HMS Warrior was a Colossus-class light aircraft carrier which was ordered in 1942 by the British Royal Navy during World War II.
Construction was finished in 1945 and upon completion, the aircraft carrier was loaned to the Royal Canadian Navy from 1946 to 1948 as HMCS Warrior.
Warrior was returned to the Royal Navy in 1948 and entered service with the British. While in service with the Royal Navy, Warrior was modernised twice,
including the installation of an angled flight deck in 1956. In 1948–1949, the ship was used in aircraft landing experiments and fitted with a rubber flight deck and in 1957,
was used as the headquarters ship during nuclear testing at Christmas Island.
In 1958, the vessel was sold to the Argentine Navy and entered Argentine service in 1959 as ARA Independencia.
The aircraft carrier remained in service until 1970 when Independencia was placed in reserve. The following year, the ship was sold for scrap. WHAT'S IN: -a new carrier CREDITS: - Hinchinbrooke original model
- Paulopanz ARA conversion INSTALL: - put all in our mod folder Enjoy @paulopanz