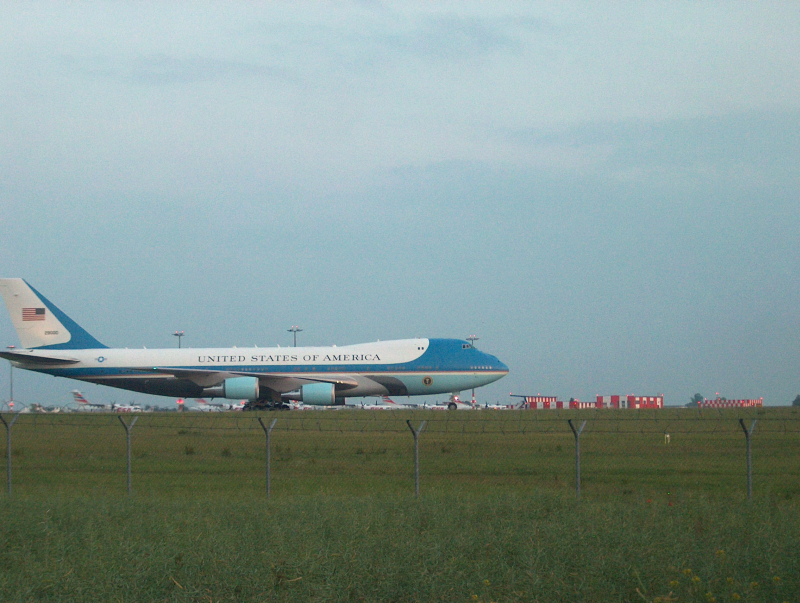 Right. Although I'm more amateur/occasional "spotter" than anything else (I even have to borrow my brother's digital camera), when AirForceOne was about to arrive to Prague Ruzyne airport (ICAO: LKPR), I couldn't miss that event.

So I packed my (err, brother's) camera and got to LKPR. Rumor was, the AF1 is going to land on 24*, so we wera all waiting on spot designated as "3"* on lkpr.info. About 5 minutes before landing, TheGuyWithATCRadio shouted something like "He's going for 06, let's move on!", so all the people went running some kilometer or two to point "4"* or "5"*. It doesn't look like that from the photo on lkpr.info, but we had to get trough some bushes and nettles and I had my summer clothes. Nice.

So, we finally arrived on position, but stupids from local police didin't allow us to go even 10 meters more, where we could get rid of house which was in our LOS on landing A/C.

But pilot was nice and either he wanted to give us a nice view, or he was taxiing trough a safe taxiway, so he gave us all opportunity to take few shots. This is one of them, with AF1 taxiing from end "24" to end "06. You can see Czech Airlines (CSA) ATR-42 and -72s and possibly some CSA B733s and A320s in background.

This all took place on 6th June, 2007, but I've just found those photos on my HDD and decided to upload two of them in here.