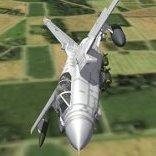 1st, the most important thing.
If you want to enjoy low level flying, you must change missioncontrol.ini file !

Then use our missioncontrol, that you can find as archive in our pack.

We also did some small lift for steering sensitivity.

This is really serious upgrade .
Only Tornado GR.1, IDS and ECR are in this pack.

We tried to get flight model as close to real Tornado as possible, so aerodynamic model
is new .
All planes have correct (reworked) engines, wing-sweep positions, max G for turning and
new cockpits (with lots of working lights).
We tested their acceleration, fuel consumption (it's still not perfect but better it was),
turning and climb rate.
We also added correct skin for Italian IDS 81 .
Weapons are no longer separate download, also missioncontrol.ini is inside of pack.

We decided to remove GR.4 from this files. She is far from finish and will be published
as separate files.

You will find 11 planes in this pack:

RAF:
-----
GR1 82 Early production
GR1 90 Better engines, more weapons than 82 model (in fact it is GR.1B with Sea Eagles)
I thought there is no sense to create same plane with only +Sea Eagles.
GR1 90 DESERT STORM Simply GR1 90 with desert camo (plane and weapons)
GR1A Recon version of GR1 90

Luftwaffe:
------------
GERMAN ECR HARM armed Tornado with Mk.105 engines
GERMAN IDS 79 similar to GR1 82
GERMAN Marineflieger IDS (with Kormorans and HARMs)
GERMAN IDS 06 which is continuation of Marine IDS after they were transferd to Luftwaffe.

Italians:
---------
ITALIAN ECR as german ECR but Italians didn't replace engines for Mk.105 and they use GPS JDAMS
ITALIAN IDS 81 very close to german IDS, can use JP233 insteed MW1

INSTALLATION:
--------------------
We higly recommend to remove/backup all earlier versions of OUR(!) GR.1 or ECR Tornadoes.
Then unpack this download and copy/paste (overwrite if needed) all files to your
MODS folder .

ianh755
Dave & Sundowners for great job they did with all previous versions
ravenclaw_007 for WE-177, new weapons and german Tornadoes loads.
Dave (again) for B61 bomb and nuke explosion from his B1B pack
Sundowner (again) for Cockpit background comms sounds
Jarhead1 for F3 cockpit
bobrock for Tornado F3

and everybody we forgot ;-) Thx guyz.

ALL BUGS ARE OUR .