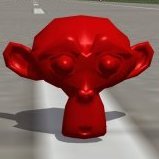 Monkey on the runway