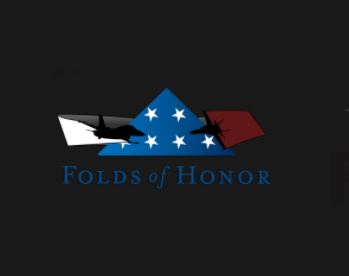 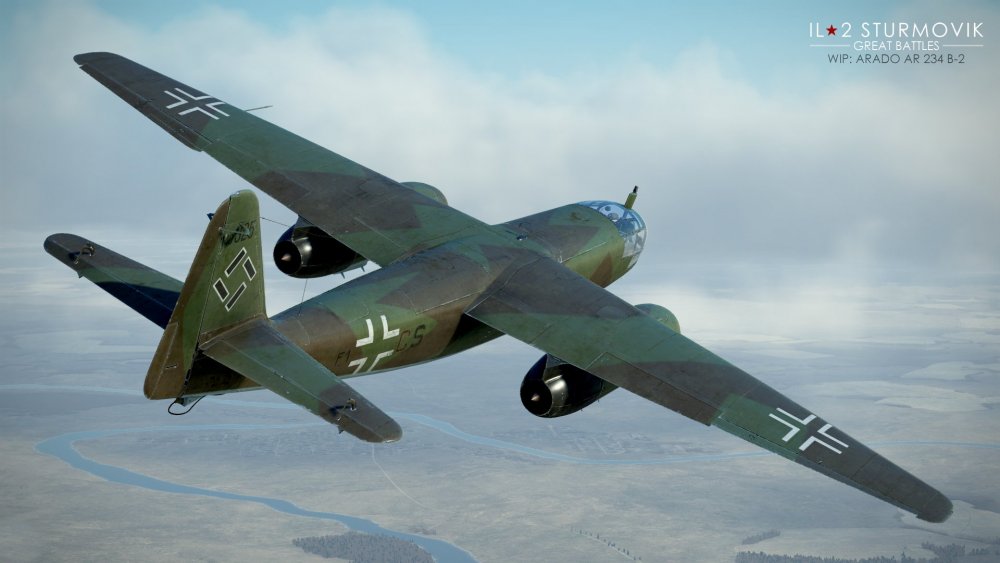 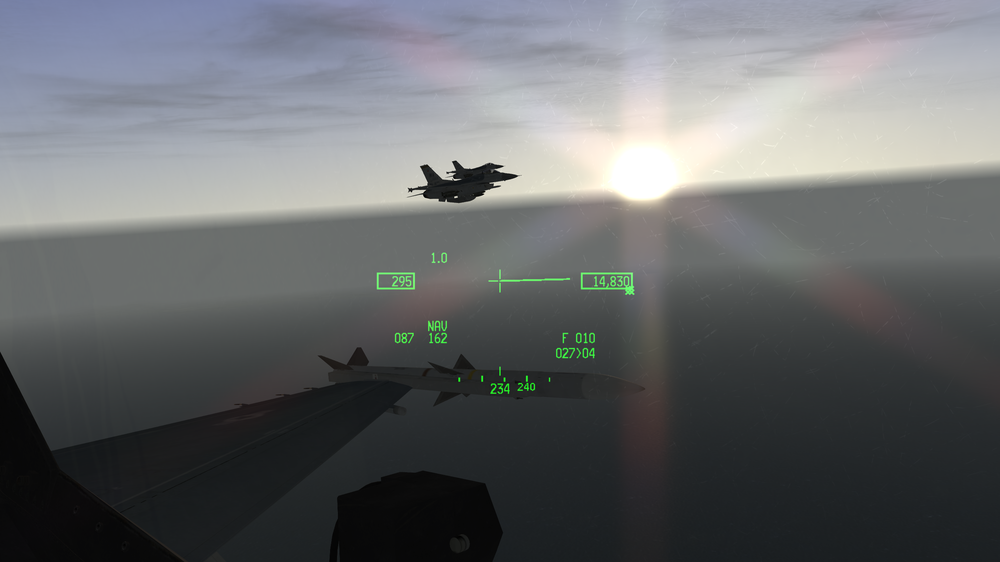 https://www.falcon-bms.com/ The latest iteration of the Tommo Inc Falcon 4.0 total conversion modification - Benchmark Sims 4.35 U3 - is available for you to enjoy as of RIGHT NOW! BMS 4.35 U3 requires a legit installation of a Falcon 4.0 (all older and newer versions are accepted alike, i.e. Microprose, Hasbro, GOG, Steam, Retroism). The check is performed both at setup time and every time you start BMS. If no valid installation is found, BMS will exit with a corresponding error message. U3 is an incremental update on top of 4.35 base + U1 + U2, so you need to have the BMS 4.35 Full Installer package and Update 1 and Update 2 available on your PC. You can both update your existing 4.35 base + U1 + U2 installation as well as perform a fresh 4.35 base + U1 + U2 + U3 installation from scratch, as you like. See the installation instructions below for details. This mod may not be used for any commercial purposes. Any such use may constitute a violation of the intellectual property of Tommo Inc and the non-commercial Terms and Conditions under which Benchmark Sims make this mod available to you. Installation instructions (they will be shown as well once you run the U3 installer): _DESTINATION FOLDER: Update 3 must be targeted at the original Falcon BMS 4.35 Setup folder, NOT at your Falcon BMS installation location! After the update installer has been finished, it will run the Falcon BMS Setup program to either apply the update to an existing BMS 4.35 base + U1 + U2 installation (choose ‘Manage product updates’), or perform a fresh 4.35 base + U1 + U2 + U3 installation from scratch. CONFIG FILE: U3 does not replace your existing config file. Step-by-step details: (1) The pre-requirement for installing the update is to have the original BMS 4.35 Setup folder available. That is the one with the blue colored Setup.exe. Take a note on the folder name where this exe is. This folder is NOT your actual game folder that you use to start BMS itself. It’s the folder wherever you downloaded and extracted the original BMS 4.35 base installer. (2) Note: You need the original BMS 4.35 Setup folder + U1 + U2, as U3 is incremental only (like all BMS updates). (3) Next, RUN (do not unzip) the U3 installer. It will ask you where the BMS setup folder is. Select the folder that you have identified in the 1st step. (4) Note: Running the U3 installer will NOT actually install U3! Instead, it will update your original BMS 4.35 Setup folder + U1 + U2 to include the new U3 data. (4) After the U3 installer has finished, it will run the blue colored Setup.exe that you have identified in the 1st step. Either perform a fresh new installation, or update your existing 4.35 base + U1 + U2 installation by choosing ‘Manage product updates’. U3 will now be shown in addition to the 4.35 base + U1 + U2 installation. (5) After the update, when starting BMS, the version string in the BMS UI will now read:
Falcon BMS 4.35.3 (x64) Build 24585_ Here’s the 4.35 U2 -> 4.35 U3 changelog:     https://www.falcon-bms.com/ 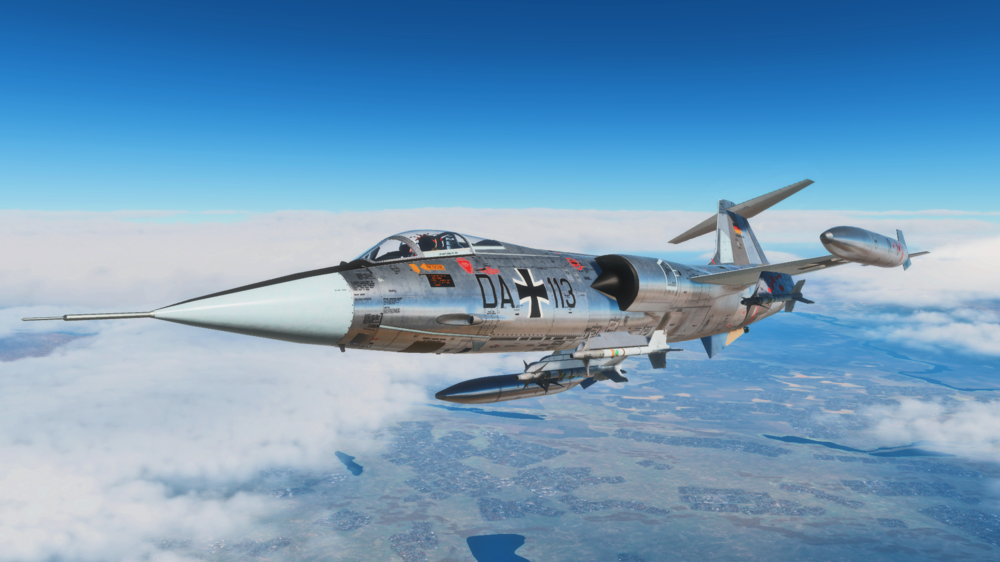 While the avionics are still based on FC3 aircraft, the new F-104 mod has a dedicated (presently non-clickable) 3d cockpit and a high fidelity EFM (external flight model). It is a work in progress, but it is already very impressive despite some known bugs/limitations. This is a further development of the VSN F-104G that previously used an SFM (simple flight model) and the F-15C cockpit (it still uses the F-15C avionics). To fly it, you need the F-15C or Flaming Cliffs 3 module. I think there are ground attack versions that use the Su-25T, which means you could fly it for 100% no cost. Get it here: Ordner: VSN F-104G FC3 EFM - filehorst.de Release Notes (changes to previous SFM Version and PreRelease-Version): 3d-Model:
-Some minor changes (working leading edge flaps) and some changes regarding special sub-variants (CF-104 e.g.)
-changed suspension and hitbox of front wheel 3d-Cockpit:
- integration of a 3d-cockpit (non clickable at the moment), licensed from Tolis (HellasPilot)
-widened front-window
-functionality of all aerodynamic instruments in the cockpit (frontal instrument panel) except: pressure (hydraulic and oil), ground-speed-error-indicator, stand-alone bank-indicator, radar-altimeter, oxygen supply,
-no functionality of right- and left side-console
-passiv functionality of pylon-lights, gun-switch, light-switch, gear-lever, flap-lever, throttle, flap-indicator, stick and rudder-pedals
-working red-flood lights
-working drag-chute-handle
-functionality of warning/indicator box (right hand side, bottom)
-HUD functionality via FC3 (F15C/Su25T)
-Radar/"T-Pod" functionality via FC3  (F15C/Su25T)
-working mirrors
-slightly elevated seat-position to match real pilot positioning
-revised and major overhaul of cockpit textures by GlobalHawk/VB6 EFM:
-EFM integrated with thanks to JNelson, TheRealHarold and A4-Team
-Database NASA CR-2144
known EFM shortcomings:
-acceleration SL to 10kft at about 30% to fast, above 10kft acceleration at about 60% to fast
-TopSpeeds about 3-10% off depending on altitude
-drag- and thrust-profile clean/TipTanks/full load-out not 100% accurate Liveries:
New Liveries by Jocko417 and Soulfreak Theme:
New main-menu, loading-screen, briefing-screen and sign By Yogi.