Today to celebrate the New Year we have released an update for Wings Over Flanders Fields Between Heaven & Hell II  to bring it to V1.19.   This update has quite a few good new improvements and fixes, so well worth checking out. 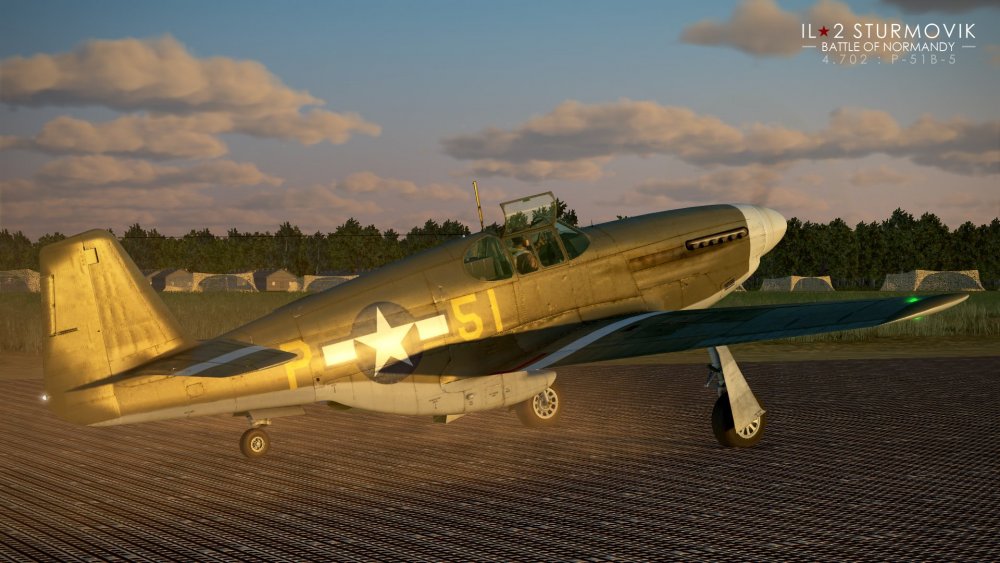 Update 4.702
Dear Friends,
We're glad to report that the work on 4.702 update is finished and it is released. It doesn't contain as many changes as the previous one, but it does bring the long-awaited P-51B-5 fighter for the Battle of Normandy! It took a very long time, but there were some reasons for this - namely the long list of its modifications. It has three different gunsights(!), two canopies - standard and Malcolm Hood where the moving part of the canopy is a single spherical shaped piece of plexiglass. This aircraft is also the first to have flexible bomb loadouts depending on the country (please note that for this feature to work you should select the aircraft skin of a country you want before generating a quick mission and not after that on the hangar screen). Of course, it also uses the new DVD damage visualization system and dynamic tactical codes.


Along with P-51B, we have a late Christmas gift for the owners of Flying Circus Vol.I - two new free campaigns Gallant Green featuring the British S.E.5a and Red Knights featuring the German Albatros D.V. There are also 10 new single-player missions showcasing all the birds of Vol.I. They were created by our friend Jaegermeister. A big THANK YOU to him for creating them. Enjoy!

Jaegermeister has created 28 custom skins that can be used with the Campaigns. You can download them HERE.

As usual, there are many other improvements and additions aimed at increasing the sim quality you can see in the list below. IL-2 Sturmovik team wishes you a Happy New Year, all the best and for your dreams to be fulfilled! 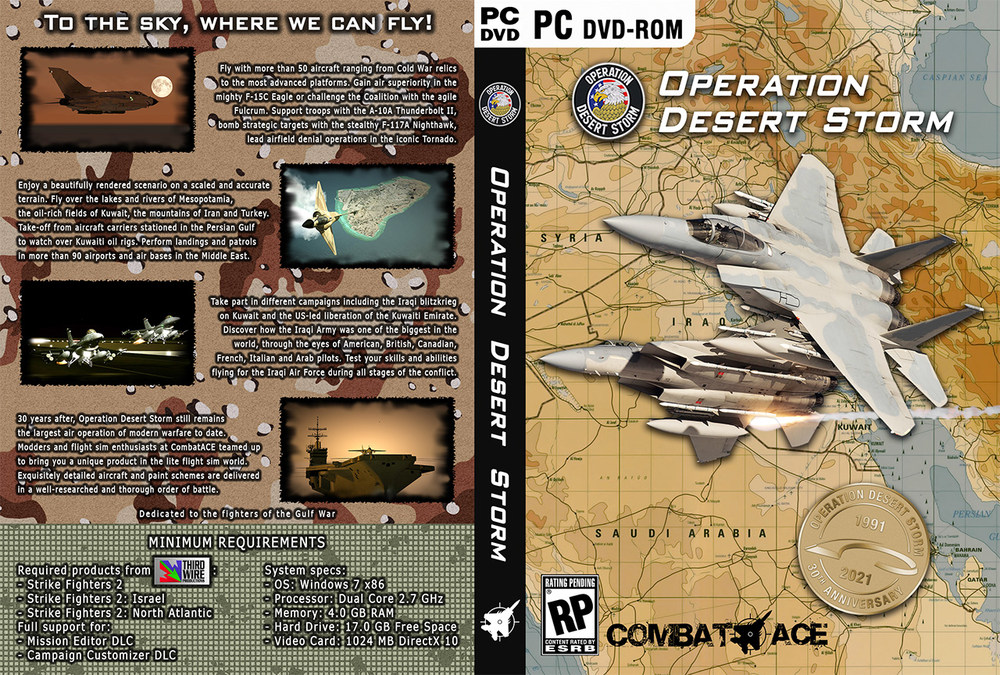 Fans of ThirdWire's Strike Fighters, I'm glad to announce the Christmas release of Operation Desert Storm: 30th Anniversary Edition. This huge and quality total conversion has seen two Early Access releases this year, one back in January 16th and the other on August 2nd. Once available to site subscribers only, now we offer an updated version of the package to all CombatACE users as our Christmas gift, regardless of a subscription. There have been usual bug fixes and important improvements since the last release. Make sure to read the change log and all the details in the mod's download page once it's approved. You are not required to own a subscription, but keep in mind that the mod is distributed in a hefty, yet highly compressed 3GB installer which contains 15GB of contents. You will need a stable internet connection in order to download it. The mod cannot and will not be offered in a different form. A subscription grants you unlimited number of downloads for its duration and will support the site's hosting costs. The Operation Desert Storm: 30th Anniversary Edition modification does NOT comply with CombatACE's Freeware Licensing. Various contents of this modification are exclusive, as such you are NOT allowed to share, redistribute and/or make use of the mod and/or its contents for other purposes, without the consent of the mod's developers. Contents of the modification are the copyright of their respective authors. My personal thanks to the ODS 30AE Development Team, you guys keep inspiring me with your great works and continuous support! And special thanks to @Erik and to all admins and moderators of this great place that is CombatACE. Happy Holidays, pilots of the virtual skies! 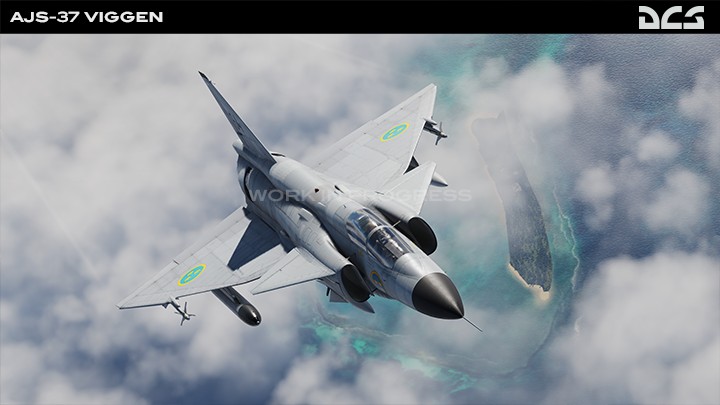 Dear Fighter Pilots, Partners and Friends, We are pleased to inform you that Open Beta 2.7.9 is coming in hot and we expect to have it for you next week. This important update will include substantial work to DCS: AJS-37 Viggen and additions to DCS: F-14A/B Tomcat. As planned, we will include a large number of new features for DCS: F-16C Viper as well as an important batch of open WWII enhancements. DCS: Voice Chat is a comprehensive approach to radio communication in DCS World and should be available in the upcoming OB. This capability has been in the works for more than two years and will bring voice compatibility across the platform. We continue to test it thoroughly whilst encouraging our 3rd party developers to configure their modules accordingly. We are confident that this component will add a simple and powerful communication layer to DCS and we very much look forward to your feedback. The festive season is here and without further ado we bring you the Winter Sale 2021, which offers up to 50% discount on our most popular modules and campaigns. The Eshop sale will run until the 10th of January 2022 at 15:00 GMT. Watch the video. We kindly remind you that the Final stage of Shadow's Trophy Tournament will take place on Saturday the 18th December at 12:00 GMT. Thank you for your passion and support.   Yours sincerely, Eagle Dynamics Team   DCS World Winter Sale 2021   The DCS Winter Sale 2021 is here, and it will run until the 10th of January at 15:00 GMT. Please take this opportunity to upgrade your DCS World with new aircraft, maps and asset packs! Checkout the eShop and find up to 50% discounts across our most popular modules. DCS World Winter Sale 2021 Video.   Mi-24P Hind Development Progress We are eager to share progress on the new pilot model for DCS: Mi-24P Hind. Please enjoy the In Development Screenshots of the textured gloves and Poljot Chronograph 3133 manual winding, shock protected watch.   Voice Chat Development Progress In the next Open Beta release, we will deliver a major update to integrated radio communications. Voice Chat operates natively within DCS and no additional software or instals are required. Please bear in mind that enhancements will be ongoing and we appreciate your patience and bug reporting as we continue developing this complex communication stack. We will also be adding radio communication to the Combined Arms roles, ground units, ATC, and AWACS. Further development will contain encrypted communication noises, clicks, distortions and voice synthesising in real time and more. To ensure correct usage of this new and improved feature, we have prepared a document on How to Use DCS Voice Chat.   Open Beta 2.7.9 Development Progress As the end of the year approaches, the upcoming Open Beta will mark an important update to DCS World. We are currently resolving some of the outstanding WWII issues and completing several new features for DCS: F-16C Viper. If you have not already, please check out the new videos in the Viper tutorial series by Matt Wagner: DCS: F-16C Viper | Air-to-Ground Helmet and DCS: F-16C Viper | ECM. Enjoy! Thank you again for your passion and support,   Yours sincerely, Eagle Dynamics Team

Attention All Pilots and Tankers!


If you are dreaming about epic dogfights after you eat your Christmas ham or turkey this year, you’ll be happy to know we have launched our Annual Winter (Christmas) Sale! As usual we are offering HUGE discounts on all your favorite Sturmovik titles and content. And remember you can buy and send Sturmovik titles as Gifts to all your wingmates, friends and family! They always make the BEST Christmas gifts!


The Sturmovik Team wishes a very Merry Christmas and Happy New Year to ALL our friends and supporters around the world during this Holiday Season. As 2021 comes to a close we reflect on what a challenging year it was and how it pushed the team to its limit in ways never dreamed of. We hope the pandemic and all it’s inconveniences and distractions will finally subside in 2022 so we can make even more amazing content and features for Sturmovik with less difficulty. We hope you and your family stay healthy and safe through the holidays this year and let’s say a hardy CHEERS to an amazing 2022!!

See you in the skies and on the battlefield! 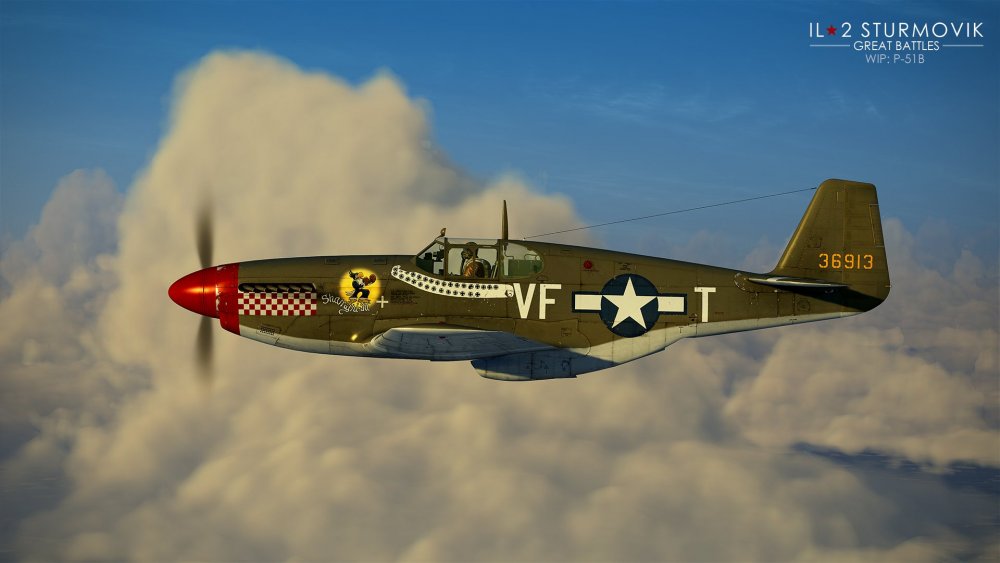 Happy Holidays to everyone in the IL-2 Sturmovik community! May it be filled with good health, family, friends and lots of time to play your favorite virtual air combat simulation!

Today’s Developer Diary is a showcase of the beautiful P-51B which we are working very hard to finish for you by the end of the month. Just some minor bugs are left along with still finishing the tricky Malcolm Hood.


We also have some shots of some new combat vehicles for you to check out like the M8 Greyhound and Universal “Bren Gun” Carrier Mk. II. And we have a new good looking USAAF bomber crewman model to show you. The fur sure looks look warm!

We’re working as hard as we can to end this challenging 2021 strong so wish us luck as we battle to get things done!