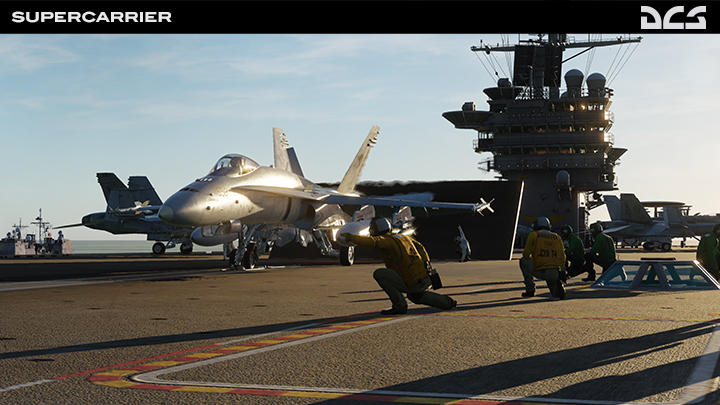 22 May 2020   Dear Fighter Pilots, Friends and Partners The Free for All event has now ended. We hope you have all found something new and interesting to discover. Please note that the DCS World Steam Edition Free for All Sale continues until the 27th of May. This week we launched an update to DCS World Open Beta. The update has been optimised to take advantage of the latest graphic drivers and processor performance as we work towards an efficient CPU load management system. With over 200 bug fixes and upgrades, this is one of our biggest updates. Most importantly, we are delighted to announce the release of DCS: Supercarrier into Early Access. Please take another look at Supercarrier: Quick Start and Supercarrier: Mission Generation and make sure you hit the ground running. Thank you for your passion and support.   Yours sincerely, The Eagle Dynamics Team   Open Beta DCS World 2.5.6 The new Open Beta encompasses a large number of updates to the environment. A number of Campaigns have also been revised to ensure that they are compatible and accessible. The F/A-18C Hornet and F-16C Viper have both received major updates. We have done what we can to include many of the community's requests, especially in regards to the Hornet’s litening pod. Our third-party partners have also been hard at work with updates to the M-2000 Mirage and the AV-8B Night Attack by RAZBAM. Notably, Heatblur Simulations have released substantial updates to the F-14B Tomcat and the ASJ37 Viggen. Read the Full Change log Magnitude 3 have also released a large update, read about it on their website:leathernecksimulations.com   Supercarrier Development Report DCS: Supercarrier is the most detailed and realistic simulation of the Nimitz-class aircraft carrier ever created. In total, the US Navy manufactured 10 Nimitz class ships. Our product will include all 5 vessels of the Theodore Roosevelt sub-class: CVN-71 Theodore Roosevelt, CVN-72 Abraham Lincoln, CVN-73 George Washington, CVN-74 John C Stennis, CVN-75 Harry S. Truman. We know that you have waited a long time for this complex module to deliver. The workload has been intense and we would like to thank all of those who put in the extra hours needed to meet this ultimate deadline, you know who you are. We are confident this powerful new module will inspire every one of us. This week marks the completion of the first set of features for DCS: Supercarrier. Read about the detailed list of features available in DCS: Supercarrier Early Access.   F/A-18C AG Radar Development Report We had planned to release the A/G radar this week but due to technical reasons, this has been moved to 3rd of June. See development screenshots   Supercarrier Early Access Download Now At Early Access launch, Case 1, Case 2, and Case 3 will be supported. After Early Access will we do additional work to include pattern re-entry after a wave off or bolter, and Automatic Carrier Landing (ACL) support. If you do not own the Supercarrier module, you will not be able to spawn on the deck to take off or catch an arresting wire to land. You would also not be able to take advantage of the new radio communications, the Ready Room, LSO, Station, and Air Boss Station. Benefit from the Early Access discount and save 20% on DCS: Supercarrier. Thank you all again for hanging in there with us. You make our dreams come true!   Kind regards, The Eagle Dynamics Team 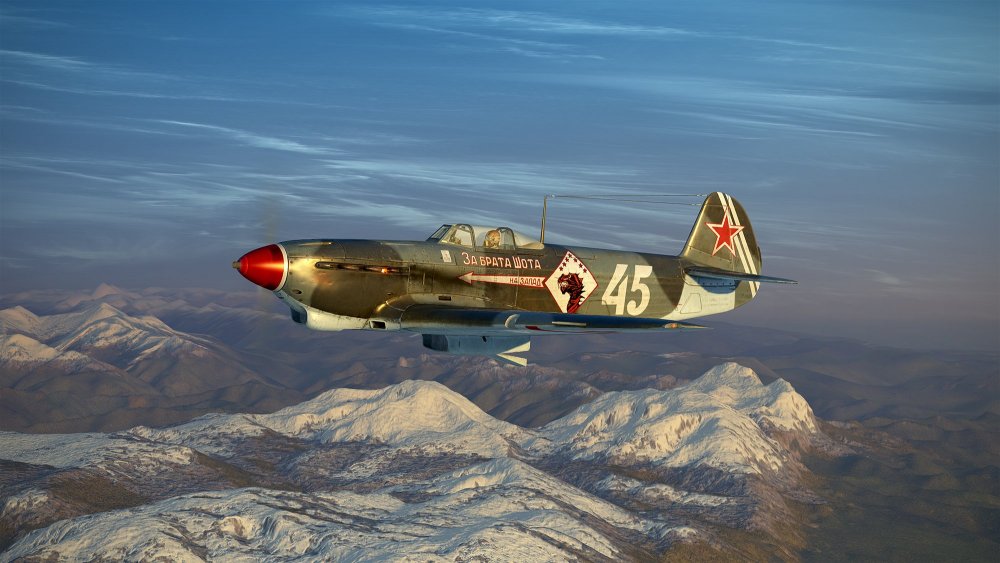 Update 4.006 will probably be released on Tuesday May 19th (tomorrow) if all goes well. If not, we'll try again on Wednesday. So back up anything you want backed up before you attempt the update. This will be a big one, maybe backup your entire IL-2 install folder just in case. Update servers will likely be jammed for a while so please have a bit of patience with us. This update is JAM PACKED with good stuff. We think you'll like it a lot.

Also, I will leave the Yak-9 and Yak-9T Pre-Order discount live for a few more days, but hurry it will end soon! These Yaks are worth every penny. A lot of fun!

Some great skins for the Yak-9 are included.


Finally a Soviet fighter with good performance and a 37mm punch! 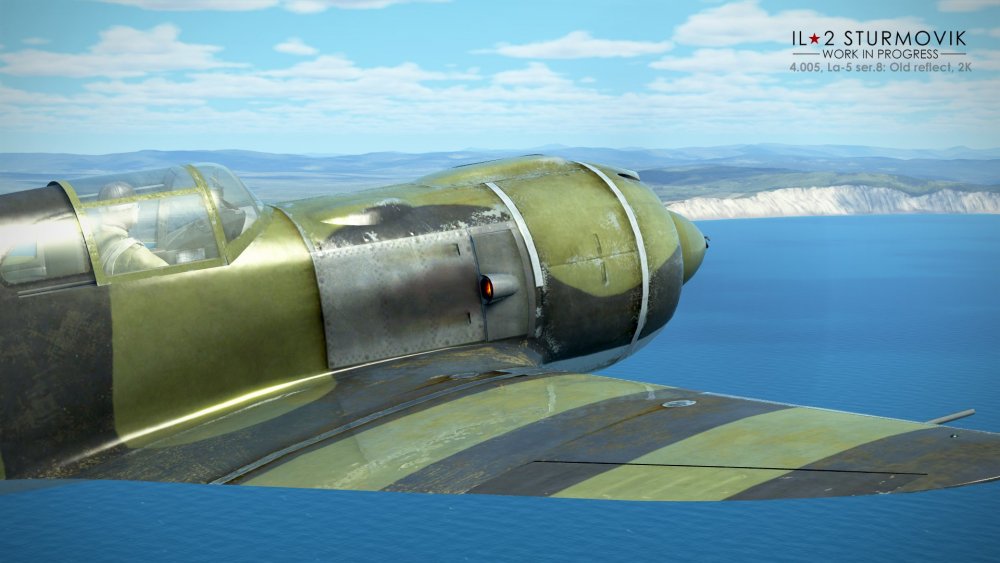 Dear friends, Update 4.006 will be released soon and we can show you more of the coming improvements. Today we'd like to demonstrate how the aircraft materials and textures will look in the new renderer compared to the old one. For instance let's look at La-5 series 8, He 111 H-6, P-38J-25, Albatros D.Va:
We also have good news about the changes in 4.006. First, the airframe damage model for the WWI planes will be tuned according to your feedback. Second, the ships in the sim will have more advanced physical models - they will be able to run aground, receive an impulse from collisions, etc. - this is important for the Battle of Normandy where they played a major role. Third, according to Tank Crew players' feedback, we added a server option to disable tank AI gunners in multiplayer. Another option that has been requested for a while - now tech chat messages are a difficulty option so the players will be on equal terms in multiplayer.   Our engineering department improved the FM and systems modeling for a number of planes, including Yak-7 and Bf-110. Tank Crew assault guns will be able to fire indirectly at a heading and distance set by the gun or platoon commander. In the graphics department, we're adding an alternative antialiasing method, FXAA, which trades some AA quality for a noticeable performance boost. It also has a side effect of somewhat improving the visibility of the contacts against the ground, especially when used in conjunction with the "Sharpen" graphics option. Several planes from already released modules will get the 4K quality external textures and the rivers and sea will get the updated water surface visualization.   As usual, the full list of the changes and improvements will be available at the update launch and it is already close to 70 items total. We're hoping that the next update will be another step forward in the development of the project and you, our customers, will enjoy it. And to finish today's Dev Blog, here are a couple of Yak-9 and Yak-9T Collector Planes screenshots from our Producer:     You can discuss the news in this thread

By Skyviper, May 12, 2020
The F-15 The F-15 is one of the deadliest aircraft in modern aviation history with well over 100 air to air kills this aircraft. This Quick Aircraft Video will try it's best to feature the story of this iconic aircraft in 3 minutes or less. As always, if you're hankering for some aircraft mods we have a few recommendations for you :) 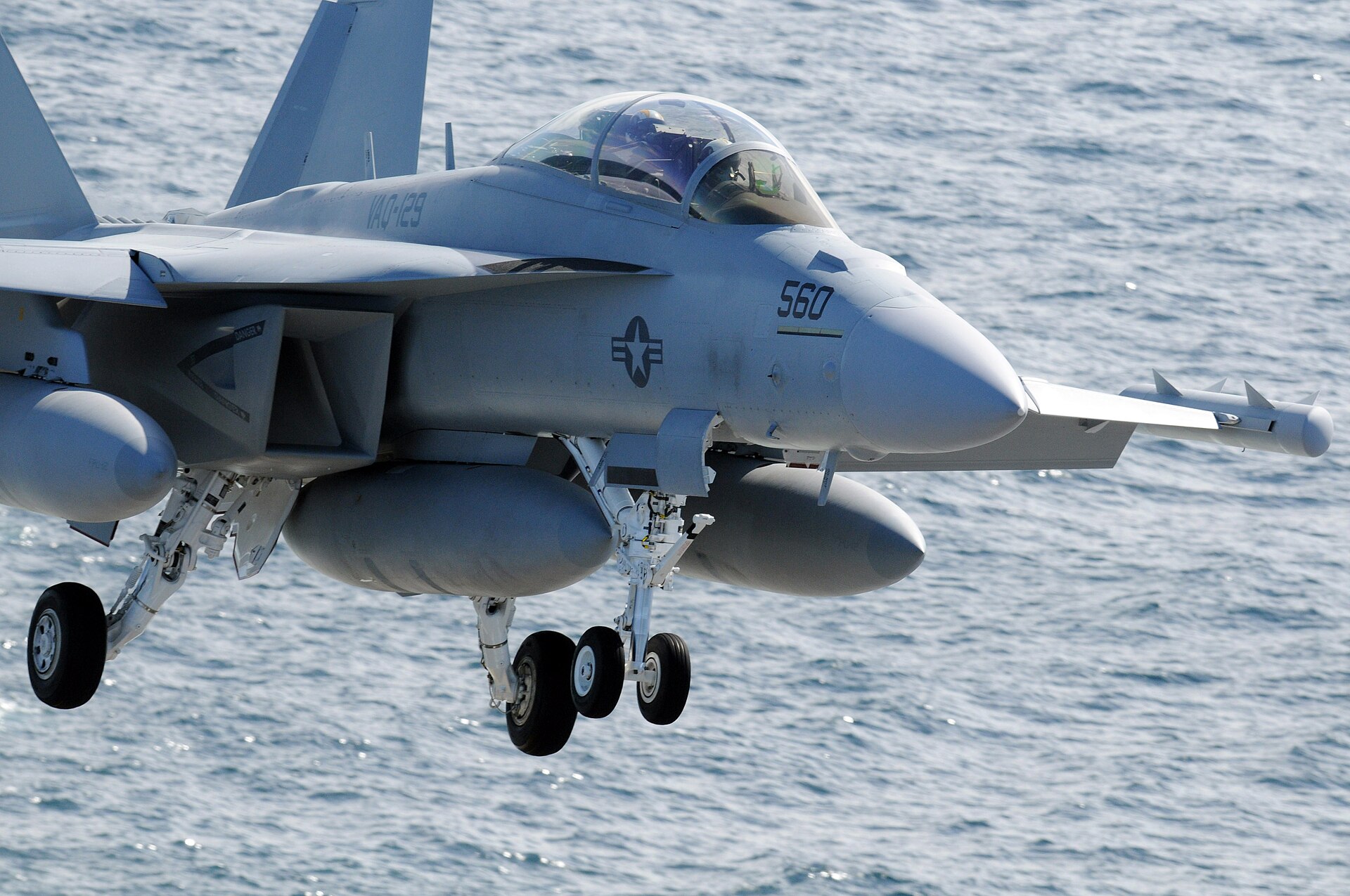 E/A-18g Growler Quick Aircraft Facts Video In last week's video we discussed the F/A-18 hornet and its path to becoming the reliable fighter aircraft used by the United States Navy and Marine Corps, and by allied nations as well. In this video we're going to quickly highlight the history behind E/A-18g Growler. The Electronic Warfare aircraft that has replaced the E/A-6B Prowler. Growler, Prowler all sounds the same doesn't it? I'm sorry to say that I forgot to include an overlay that mentions the fact that the Growler's call sign was changed to "Grizzly" to avoid confusion. All video in this presentation is from the men and women of the United States Armed Forces who kindly uploaded their works to Dvidshub.net a great place for military aviation footage. Their footage is released under public domain.     If you would like to discuss this video you're invited to do so here in this thread or in the pub if you wish.   Of course if you're not interested chatting and just want to get some SF2 action in with some Hornets created by our talented Mod Developers. We understand that too :) Dear friends!   We would like to congratulate you on the very important holiday - 75th Anniversary of the Victory in Europe! On this day 75 years ago the hard and long road to peace, that cost millions of lives, has finally come to its end at the European theater of the world war. The people of all nations got a second chance to live. Let's remember the heroic deeds of our ancestors and be thankful to them - even though that today's crisis and problems are significant, they can't be compared to the gravity of the situation and the hardships of those years of war.     The life that was given to us by the heroic deed of our ancestors continues. Coincidentally, this is a small anniversary for our project, which is entirely dedicated to the World War II events, as well - you're reading its 250th Developers Blog. Our work on the sim also continues - in 2 or 3 weeks we plan to release the next update 4.006. It will bring not only the new player controllable machines - Yak-9 and Yak-9T Collector Planes and SU-152 assault gun for Tank Crew - but also the fundamental changes in the graphics engine: the renderer will be switched to Deferred Shading. At the moment this update is already in the beta testing and our team is working on debugging and finalizing it. The changelist will be a long one once again, it already includes more than 50 changes in different areas of the sim. To illustrate what these renderer changes add to the visuals, we want to show you the in-game screenshots of Yak-9T, which is a good aircraft to display the new graphical capabilities:     Another pic we want to show you the WIP model of the early war German pilot which will be used in BoM, BoS and BoK timeframes. It's going to appear in the project a bit later, but it won't be a long wait: