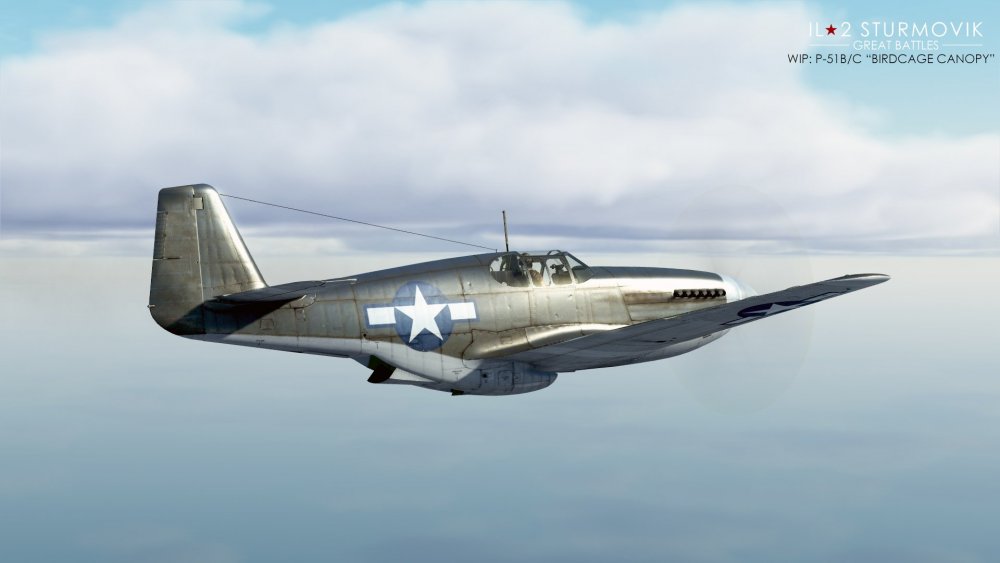 Today we want to show you some WIP pics of the P-51B/C with the birdcage style canopy. It really changes the look of the P-51 and it's obvious why they changed to the bubble style canopy with the "D" model and some "B" airframes had their birdcage replaced with the 'Malcolm Hood' canopy which was a semi-bubble modification. We will also model the Malcolm Hood.

Also, if you happen to have any detailed references on the Malcolm Hood's canopy frame, rails or emergency release mechanism please share them with us. We could use some more detailed pictures or drawings of it.

The P-51B/C is unfortunately behind schedule and should have been ready by now, but she is getting ever closer to release and likely to be finished next month.


Also, here is a pic of our American bomber pilot model ready to face some German flak! 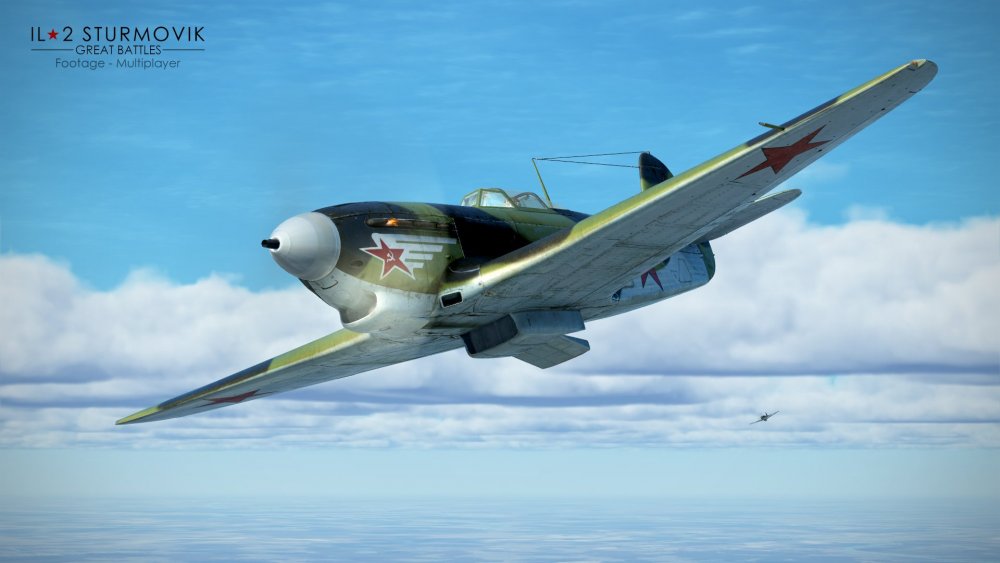 This Dev blog is a bit unusual - I wanted to illustrate how the virtual world created by our team is not just a place to show nice-looking aircraft and vehicles, but it comes really close to real world experiences and situations (which is the ultimate goal of any sim).

This past Saturday night, myself and Roman (one of our flight model and aircraft systems engineers) had time to enjoy our sim as players and our experience turned out much like the real Eastern Front air clashes - somewhat confusing, challenging and stressful.

We flew a pair of Yak-9Ts to patrol a water basin area where both Soviet and German priority targets were located. I was the flight leader and... it didn't go well.

Upon reaching the area, I spotted a target flying at our altitude at a 7-10 km distance and closed up to identify it. The target started to do shallow, full-speed evasive maneuvers. I identified it as Fw 190 even though I wasn't totally sure. Roman (my wingman) wasn't confident as well and we continued the approach. At a closer distance where a positive ID could be obtained the target made a sharp evasive maneuver that continued as a dive so I decided to engage. The first single 37 mm shot connected and the target exploded, the pilot was killed. Very cool to watch, but immediately we saw the report (in the chat) that a La-5 was destroyed. Oh no!


Quite a negative combat situation – I was thinking about the inevitable court-martial as we continued the patrol. Then Roman spotted a target on the right - a medium-sized twin-engine aircraft not more than 2 km away. Having forgotten about the tragedy that just happened for a moment, we rushed to it. This time we closed to be absolutely sure what it is - it could be Bf 110, but also a friendly Pe-2.
Climbing up from below the contact, Roman identified it to be German by yellow wingtips and he started his attack, but the German pilot wasn't sleeping and successfully evaded the attack while his rear gunner hit the Yak’s radiator. But this is why a pair is always more effective than a single fighter - having evaded Roman's attack the 110 exposed itself to me!  A short 37 mm burst connected and blew off part of its wing. The pilot tried to keep his plane in the air, but couldn’t manage to do it and fell to the ground below. We didn’t see any chutes.


Apparently though, the 110 wasn't alone. A fighter that must have been providing cover saw what had happened and quickly closed the distance between us. Roman managed to spot it just in time and maneuvered smartly to get onto his six o'clock, then the FW made a fatal mistake and made a sharp climb which slowed him down and made himself a fatter target with much less deflection than say a sharp diving turn would have. I always find it easier to lead a climbing target than a turning target. A few 37mm rounds connected making it a falling wreck.

Since Roman's radiator was leaking and our 30 rounds ammo was nearly spent, I made a decision to return to base immediately. In spite of the damage sustained, Roman’s Yak successfully reached the airfield and landed in time.

After cutting off the engine and opening the cockpit canopy, the thrill of victory quickly left and a dark feeling of the grave episode of mistaken identity set in – a Willy’s jeep containing the Commissar pulled up.

An interesting thing - I wrote this immediately after the landing and before viewing the flight record. After viewing it, I believe this experience proves that what we had just done was even more lifelike and close to what you usually read in pilot memoirs than I first thought. When I saw the flight record, it turned out that when I wrote 'the first single shot' or 'a short burst' I couldn't be more wrong. I fired at least five short bursts at the first target (the friendly La-5) before I hit it. The second target was also hit only after firing for some time when it was doing scissors evasion maneuvers. This is close to historical reality as well - memories of combatants can sometimes be confused or tell a different story than reality. It’s this kind of thing that helps make our job of creating a ‘simulation’ difficult at times.

On the actual development front, our modeling partner Ivan is working hard on the IAR-80/81 and it’s beginning to take shape nicely. When we see the cockpit starting to take shape, we will offer it up for Pre-Order. This plane promises to be very interesting.

We're happy to report a good progress on the Normandy project. The most of the buldings anf ground vehicles are ready and the work on the sea objects is going at full head flank speed - today we can show you a couple of screenshots straight from 3D editor screen. This is WIP model of a Gleaves class destroyer that participated in the invasion.

b) Added Bombsight to Strutter B1 (single seater bomber).

Also includes all the previous patches. 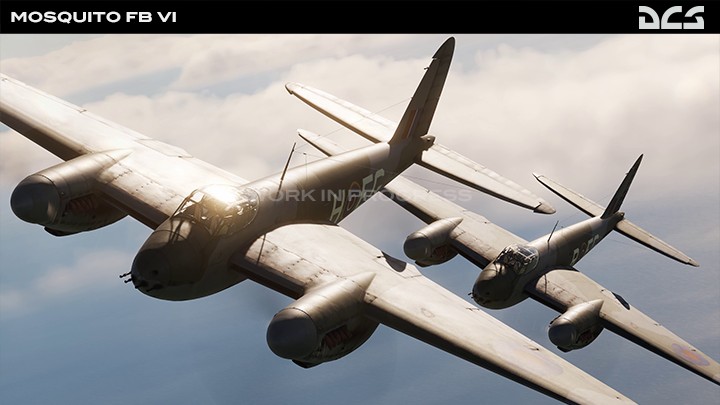 Dear Fighter Pilots, Partners and Friends, DCS: Mosquito FB VI is now available for pre-order from our Store and Steam with a 30% discount. The “Wooden Wonder’' is multi-crew compatible and represents a grand addition to our WWII lineup. The model has been built from original drawings kindly made available by the Smithsonian Institute Washington DC and De Havilland support Ltd Duxford to whom we are very grateful. We look forward to seeing this iconic aircraft in the air very soon. Open Beta 2.7.5 has brought the addition of the CBU-105 WCMD for the Viper. Radar improvements include the new Range While Search mode symbology, more accurate detection and tracking ranges and fine corrections to AIM-120. An auto-backup function for the Mission Editor and a substantial number of other improvements have been delivered to DCS: JF-17 Thunder, DCS: F/A-18C Hornet and DCS: F-14A/B Tomcat.  DCS World versions of 1.2.x and 1.5.x and all products that had key-protection are no longer supported and fully deleted from our servers. Technical assistance and software updates from DCS Updater are no longer available for these deprecated versions. We strongly recommend that you make a backup and move to DCS World 2.7 to avoid a situation where you need services or support that is no longer available. Thank you for your passion and support.   Yours sincerely, Eagle Dynamics Team   DCS: Mosquito FB VI Pre-order available Originally conceived as an unarmed, fast-bomber, the Mosquito’s mission profile broadened substantially during the war. We have focussed on the most widely used variant which offered outstanding versatility to carry out virtually any offensive task. Considered by many as the most extraordinary aircraft of the war, this genius design truly is a Wonder in every respect. Watch the Trailer DCS: Mosquito development is going smoothly. We are adding the finishing touches to the external model and implementing the WWII Damage Model. We have updated the list of Mossie Early Access features and will be making additions in autumn. Early Access features: Highly detailed and accurate external 3D model 6 Degree of Freedom, fully clickable cockpit with latest visual effects Flight dynamics based on official reports, our own CFD research, and pilot feedback Detailed fuel system and optional external tanks Authentic electrical system Complete hydraulic and pneumatic system Propeller feathering T1154 (transmitter) & R1155 (receiver) radio units An internal structure-based damage model Most famous historical skins Early Access armament: 4 British Browning .303 machine guns 4 Hispano Mk.II 20mm cannons 250lbs and 500lbs bombs in the bomb bay and under each wing Pre-order now and receive a substantial 30% discount. 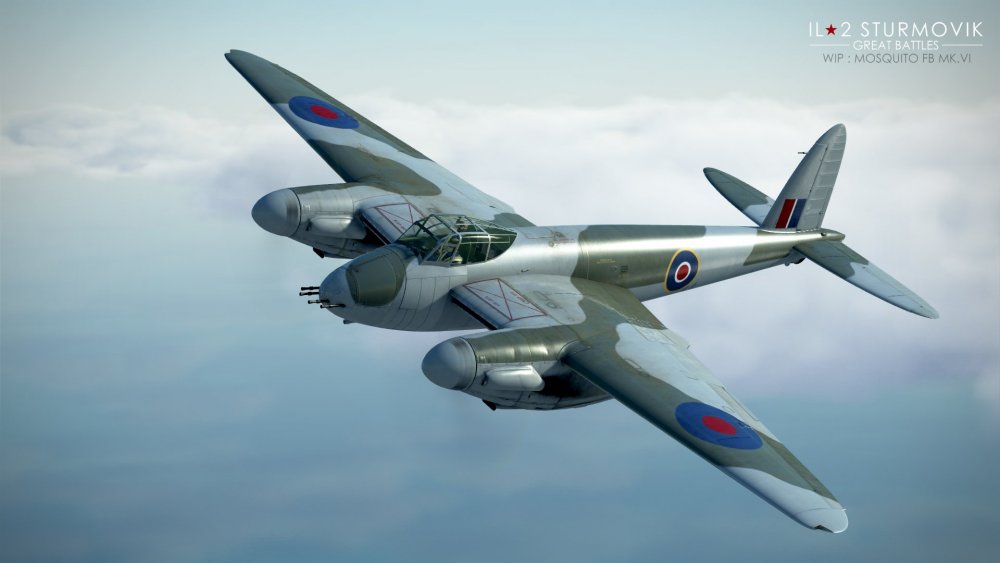 Our Mosquito FB Mk,VI for Battle of Normandy is coming along nicely. Some very early WIP shots of it in the engine. Still much support work to do for it still. Will initially be available to fly with 8 squadrons in Career mode.

Q. If it's made from polygons is it still a Wooden Wonder? 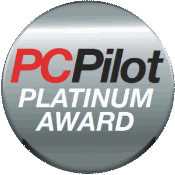 PC Pilot Magazine has just published a review of Wings Over Flanders Fields Between Heaven & Hell II,  in Issue 135 out now!