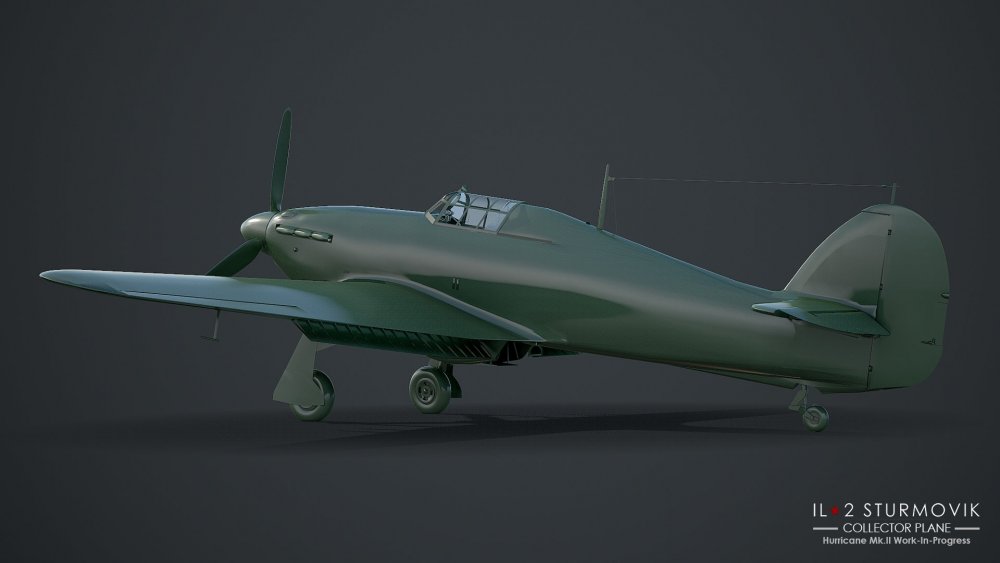 We have a few important announcements to share with you about our latest Collector Plane Pre-Orders, BOBP and FC Steam Releases and BOBP Standard Edition Release in the Official Webstore.

We are proud to announce that we have begun taking Pre-Orders for the Yak-9, Yak-9T and Hurricane Mk.II Collector Planes.

The legendary British-built Hurricane came to fame during the Battle of Britain where it did the heavy lifting for the RAF in that pivotal battle. The Hurricane Mk.II series which consisted of the a,b,c and d variants was outfitted with a few different armament configurations. This included either the 12 x .303 machine guns in the wings or 4 x 20mm Hispano cannons also fitted in the wings. Many of the Mk.II’s were of the ‘Hurribomber’ variety with wing racks for 250lb or 500lb bombs. One later variant could also carry two 40mm cannons for anti-armor duty. The Hurricane was built in large numbers and the Mk.II series was sent to all corners of the war to fly and fight, including the Eastern Front where the Soviet VVS put them to good use in several sectors. Pre-Order this legendary plane today right HERE!

The Yak-9 was the first model in the most mass-produced family of the WWII Soviet fighters - with its many modifications the total amount of units produced reached 16,769. The work on the new long-range recon and fighter plane began in the Yakovlev design bureau during Spring 1942. Compared to the earlier Ya-7, it had a boosted M-105PF engine, a lighter wing of composite structure, and the lower spine with a bubble canopy that significantly improved the rearward visibility. However, the armament was reduced to one nose-mounted 12.7mm UBS MG and one engine-mounted 20mm SHVAK cannon firing through the propeller hub. The mass production of the new fighter and its arrival to the front-line units begun only in 1943. In combat, the Yak-9 proved itself as very maneuverable and easy to control fighter, earning the love and respect of many Soviet pilots along with volunteer French from the Normandie Niemen fighter regiment. Pre-Order this Soviet ace-maker HERE!

An important variant of the Yak-9 family was the Yak-9T (tank), which appeared in early 1943. In addition to one 12.7mm UBS MG it was armed with a 37mm engine-mounted cannon model 11P (later NS-37) instead of the usual 20mm SHVAK. The installation of such a heavy and large weapon required reinforcing the airframe in the nose section and moving the pilot cabin 40cm (1.31 ft.) rearward, which resulted in worse forward and underside visibility. Combat trials showed that Yak-9T is capable of not only engaging bombers and various ground targets, but it could also hold its own as dogfighter. Its flight characteristics were only marginally worse than Yak-9 while packing a much bigger punch. Its production started in March 1943 and ended only in June 1945 with a total of 2,748 units produced. Pre-Order your tank-killing Yak right HERE!

We are thrilled to announce that Battle of Bodenplatte and Flying Circus are coming to the Steam store immediately after the Autumn Sale ends. We are aiming for December 3rd 2019 for the release. The BOBP release on Steam will be the Standard Edition with the two additional Collector Planes being sold separately. Flying Circus will include all ten aircraft, same as on our website. Each product will have a launch discount equivalent to the current Early Access discount enjoyed by customers on our website. The prices are as follows.

Note: The launch discounts on Steam will be in effect for two weeks once launched.

We are also happy to announce that we are releasing the Standard Edition of BOBP along with the P-38J-25 and Fw-190 D-9 Collector Planes in the Official Webstore on Dec. 3rd, 2019. We will also offer an equivalent Launch Discount for these three items until Dec. 17th, 2019.

And finally, we have extended the Early Access discount of $10 Off for BOBP and FC in the Official Webstore until December 17th, 2019. After that date the price will rise to its standard price of $79.99 and likely remain there for an extended time. Hurry if you have not already taken advantage of this great deal before it expires! Grab your copy HERE and HERE! 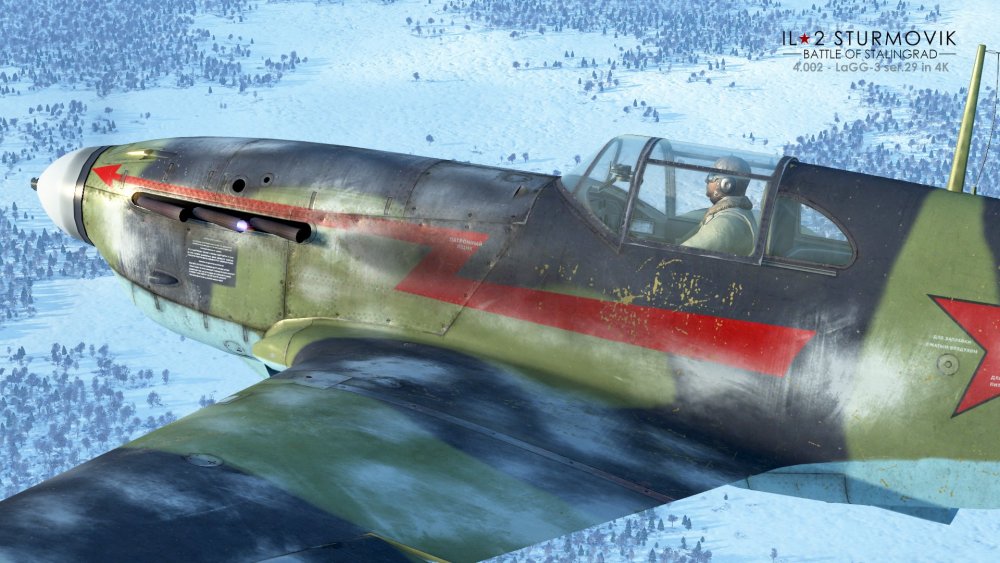 Master Server Infrastructure Maintenance We will have infrastructure maintenance works to be performed on Tuesday, November 19, 2019 from 04:00 to 06:00 UTC. All users will not be able to connect to the DCS Master server and all account sessions will be reset. We appreciate your patience and understanding during this short downtime. Stable Release updated After a relatively large number of Open Beta updates, we have released a substantial update to the Stable version of DCS World. Among the many highlights of the new Stable version, users will now be able to enjoy the Early Access version of the DCS: F-16C Viper. Other highlights include: AGM-62 Walleye II and AWW-13 Data Link Pod for the DCS: F/A-18C Hornet Many updates and fixes to 3rd Party modules such as the C-101 and M-2000C You can read the entire changelog here. Our next Open Beta is set for 20 November 2019 and is planned to include: F-16C Viper features Track While Scan (TWS) radar mode AUTO steerpoint sequence mode Corrected flight director (sherm) behavior Functional CMDS (countermeasures) DED page New stores drag implementation Initial data link (Link 16 / MIDS) External lights Centerline fuel tank Corrected lock hold when switching master mode Corrected radar lock-only RWR indication Corrected INS steerpoint change Corrected HMCS enable/disable HOTAS command F/A-18C Hornet features Aft Pod Antenna Option Following the 20 November 2019 Open Beta, we will heavily focus on the Hornet to include such items as Track While Scan (TWS) and AACQ radar modes, updates to the targeting pod, and updates to existing weapons systems and countermeasures. Development Report #5 Supercarrier - "Population" of our new aircraft carrier is not limited to the flight deck but also the sailors and pre-flight crew of the island. Following the early access release, it will later it will be possible to occupy the Air Boss and Landing Signal Officer (LSO) locations in both 2D and VR. All of this will be available in the new DCS: Supercarrier module. In the meantime, please enjoy these work-in-progress images. Spitfire Sound Updates - We have greatly improved all the Spitfire LF Mk.IX engine and propeller sounds. New sounds were recorded from an actual Spitfire Mk.IX and added to the game. Our sound engine factors in altitude, airspeed, engine RPM, manifold pressure, and many other elements. You can hear the dramatic difference from within the cockpit and outside the aircraft. The update is available in the current Open Beta and will be available in today’s Stable version! Enjoy this video highlighting the updated sounds DCS: M-2000C by RAZBAM Updates - Working closely with the French Air Force, RAZBAM brings you an all-new Mirage 2000C cockpit! This cockpit features all-new textures, radio panel, ECM, NVGs, and much more. The cockpit mesh has been extensively overhauled with new edge loops for better edging and a doubling of the polygons to improve both the on screen and VR experience. Using their relationship with the French Air Force 2/5 Squadron, RAZAM has created an M-2000C cockpit that is as close as you can get to the real thing. Using this opportunity, RAZBAM has fixed various inaccuracies by using our latest workflow and tools. New Features: New cockpit model New cockpit textures New cockpit lighting New radio panel New ECM panel New Seat Harness New INS Screen Added NVG’s with Mount Added under glare shield lighting assembly Added flashlight Cockpit Update Video The Virtual Festival of Aerobatic Teams 2019 The Virtual Festival of Aerobatic Teams or VFAT is a virtual, international airshow like RIAT or MAKS. The pilots simulate the displays of real aerobatic teams like the Patrouille Suisse, Thunderbirds, Blue Angels, Russian Knights and Blue Impulse; however, many teams also create their own spectacular displays. VFAT is currently the only virtual airshow where such a large group of teams gather to create an event of this size. Spectators can watch the event live using internet streaming technology. VFAT takes place once a year and offers the opportunity for virtual aerobatic teams and solo pilots to present their hard work for the enjoyment of the general public! Watch live Dec. 7th & 8th on Twitch. VFAT Video Yours sincerely,
The Eagle Dynamics Team

"Personal note, buying on their website contributes the Developer with 100% of your purchase"

Dear Pilots! Battle of Bodenplatte, Flying Circus and the Achtung Spitfire! Campaign are nearing official retail release in just a few weeks and to celebrate we are giving you the opportunity to purchase our older Battle Modules and previous Scripted Campaigns for an amazing 75% OFF!! No doubt you will want to pick up our latest titles, but in case you don’t already own some of our previous titles, this is the most aggressive pricing ever offered! It’s also been 75 years since the time period in which our Battle of Bodenplatte title takes place. It’s was the height of the war on the Western Front and the Allies were struggling to break into Germany. This era was the pinnacle of piston powered aircraft designs and saw the first introduction of jet fighters. Oct. 15th - Oct. 31st 2019 on Website Oct 15th - Oct. 27th 2019 on Steam BOS = 75% OFF (Website and Steam)
BOM = 75% OFF (Website and Steam)
BOK = 75% OFF (Website and Steam)
Blazing Steppe = 75% OFF (Website and Steam)
Fortress on the Volga = 75% OFF (Website and Steam)
Ten Days of August = 75% OFF (IL-2 Website Only)
Havoc Over the Kuban = 75% OFF (IL-2 Website Only) Cliffs of Dover: BLITZ – 75% Off (IL-2 Website Only) All Rise of Flight Content = 75% OFF (Website and Steam) Official Webstore
https://il2sturmovik.com/store/battle-of-stalingrad/ Steam
https://store.steampowered.com/…/IL2_Sturmovik_Battle_of_S…/ And don’t forget to Pre-Order our next upcoming Scripted Campaign – Achtung Spitfire! Available exclusively on the Official IL-2 Website As usual, if you purchase a plane you already have you can send it as a Gift to a friend or squadron mate. IMPORTANT NOTE: The $10 OFF Early Access discount for Battle of Bodenplatte and Flying Circus will be expiring in just a couple weeks. If you want to get that discount please don’t delay! NOTE: having at least the base game (Stalingrad) on Steam means you can launch it from the Steam client without entering a login and password and you can access your IL-2 content purchased elsewhere if you link the accounts. The Sturmovik Team